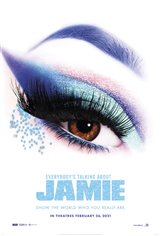 Jamie New (Max Harwood) lives in Sheffield, England. All he's ever wanted to do is dress up in sparkly dresses and high heels and perform onstage as a drag queen. However, some of his classmates bully him, tell him he's a freak. His father (Ralph Ineson) is disappointed in Jamie, telling him how badly he wanted a son.

Feeling rejected, when Jamie turns to his mother (Sarah Lancashire), asking if she ever wished he was like other boys, she tells him "never." His friend Pritti Pasha (Lauren Patel) is also supportive, comparing him to Beyoncé and telling him to stop waiting for permission to be himself.