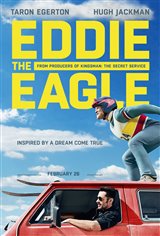 A biopic about Great Britain's most famous ski jumper, Eddie "The Eagle" Edwards (Taron Egerton), who finished last in the 70 m and 90 m events at the 1988 Winter Olympics in Calgary. Despite that, he became famous as an underdog and made appearances on TV talk shows around the world. Without any funding, Eddie paid for his own training and equipment.

Although Eddie was the best ski jumper in Britain at the time, some in the ski jumping world felt he made a mockery of the sport, which led to the International Olympic Committee (IOC) instituting what became known as the Eddie the Eagle Rule, in which even when a competitor is the best in their country, they have to place in the top 30 per cent in international events to qualify for the Olympics.