Eco-Pirate: The Story of Paul Watson 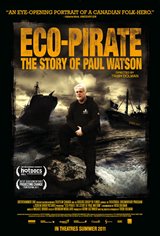 ECO-PIRATE: THE STORY OF PAUL WATSON is a feature-length documentary about a man on a mission to save the planet and its oceans. Part Captain Nemo and part Grizzly Man, the film follows Watson as he repeatedly flouts the law, so that he may apprehend what he sees as the more serious lawbreakers; the illegal poachers of the world.

Using verité sequences shot aboard his ship as a framing device, the documentary examines Watson's personal history as an activist through archival footage and interviews, while revealing the impact of this relentless pursuit on his personal life. From the genesis of Greenpeace to sinking a pirate whaling ship off Portugal, and from clashes with fisherman in the Galapagos to Watson's recent headline-grabbing battles with the Japanese whaling fleet in Antarctica, this film chronicles the extraordinary life of the most controversial figure in the environmental movement—the heroics, the ego, the urgency of the world's original eco-pirate.