Down the Road Again 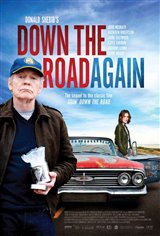 The sequel to the Canadian classic Goin' Down the Road, this film picks up 40 years later when Pete is on the cusp of retirement from his job as postie. Pete has been living in Vancouver, disconnected from his old life and friendships. On the verge of his retirement, Pete learns of the death of his somewhat estranged best friend, Joey, who has sent Pete the urn containing his ashes, three letters, money and the plea that Pete fulfill his final wishes.

Instead of peaceful retirement, gardening and dreaming of a more creative life, Pete instead finds himself on the road again in the old Chevy. This road trip is a true adventure and each letter, a clue as to what will happen next. From the grave, Joey dictates Pete's next steps and ultimately changes the course of his life.