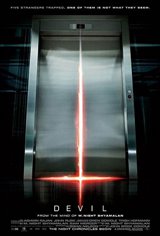 Five strangers in Philadelphia begin their day with the most commonplace of routines. They walk into an office tower and enter an elevator. As they convene into this single place, they are forced to share a confined space with strangers. Nobody acknowledges anybody else. They'll only be together for a few moments. But what appears to be a random occurrence is anything but coincidental when the car becomes stuck. Fate has come calling. Today these strangers will have their secrets revealed, and face a reckoning for their transgressions. Slowly, methodically, their situation turns from one of mere annoyance to sheer helplessness and abject terror. Terrible things begin to happen to each of them, one by one, and suspicion shifts as to who among the five is making it all happen... until they learn the unspeakable truth: one of them is the Devil himself. As those on the outside try in vain to free them, the remaining passengers realize that the only way to survive is to confront the very wickedness that has led them to today.

DEVIL is the first installment of The Night Chronicles, a series of terrifying stories conceived by M. Night Shyamalan that he now turns into movies with up-and-coming filmmakers.