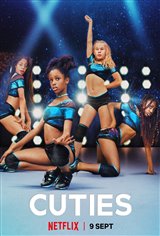 Amy (Fathia Youssouf Abdillahi) lives with her mother and two little brothers in France. Their household is old-fashioned, religious and very strict, but when her absentee father decides to take another wife, despite still being married to her mother, it makes Amy feels anger towards her father. His actions lead her to feel disconnected from her family's way of life.

When Amy sees a group of four self-trained girls going through a dance routine in the playground, she wishes she could be one of them. They ask her to video their routine on her phone and when she gets home, she practices it over and over. Amy tries to match the skimpy clothing that the other girls wear by borrowing her little brother's T-shirt and is eventually accepted by them. When she watches other videos online of older women doing suggestive dances, she incorporates it into their routine as they all prepare to enter a dance contest.