Crime Scene: The Vanishing at the Cecil Hotel (Netflix) 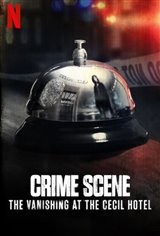 This is the first season in a new documentary series that deconstructs the mythology and mystery surrounding infamous locations in contemporary crime.

For over a century, Cecil Hotel in Downtown Los Angeles, sometimes called "Hotel Death," has been linked to some of the city’s most notorious activity, from suicides to murders to housing serial killers, including "Night Stalker" Richard Ramirez, who would return to the hotel covered in blood, but his appearance was never questioned by hotel staff.

One of the most haunting mysteries in recent years was the disappearance of 21-year-old Canadian tourist Elisa Lam. In 2013, Elisa was staying at the Cecil when she mysteriously vanished, igniting a media frenzy. The last video footage of her was on a surveillance camera inside the hotel. She's shown entering an elevator and pressing buttons inside. When the doors don't close, she tenatively peeks out to see if anyone's there, then ducks back inside and squeezes up against a wall as if she's hiding from someone. When the elevator doors still don't close, she steps out once again, and appears to be talking to someone, waving her hands in a strange manner. She was never seen alive again.

Lam’s disappearance, the latest chapter in the hotel’s complex history, offers a chilling and captivating lens into one of LA’s most nefarious settings.