Conversations With a Killer: The Ted Bundy Tapes (Netflix) - Story 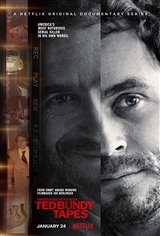 It's been over 30 years since “America’s most notorious” serial killer was executed by electric chair, yet here we are with two new offerings from director Joe Berlinger: Extremely Wicked, Shockingly Evil and Vile a biographical feature film, and Conversations with a Killer: The Ted Bundy Tapes, a documentary mini-series. So what makes Ted Bundy such an interesting figure for so many?

America has been home to many notorious serial killers, including the likes of Gary Ridgway (Green River Killer), Jeffrey Dahmer (The Milwaukee Cannibal), Ed Gein (The Butcher of Plainfield), Dennis Rader (BTK Strangler), and the Zodiac Killer. Many have body counts that far surpass Bundy’s, with some going on to inspire their own films and fictional characters, but Bundy remains a unique figure even amongst this group of deplorable characters. How so, you may ask? Well, for many years leading up to his execution there were many who doubted Bundy had ever committed those crimes, despite mounting evidence.

Berlinger’s feature film Extremely Wicked, Shockingly Evil and Vile takes a look at how that doubt manifested in someone close to him. The film's approach comes from telling the story from the perspective of Ted Bundy’s (played by Zac Efron) longtime girlfriend, Elizabeth Kloepfer (played by Lily Collins), named Liz Kendall in the film.

The course of the film shows how she remained in a relationship for years with Bundy despite the mounting evidence against him. That the trailer suggests she had doubts about his guilt even when he was incarcerated speaks to the depths of just how unbelievable the disconnect was for people like Liz in their view of Bundy.

It should be noted that when word of the murders in the state of Washington really began to gain traction, Bundy became immediately recognizable to Kloepfer. In the trailer, even as she confronts Bundy about his resemblance to the suspect sketch in the trailer, she quickly changes her tune when her daughter lovingly greets him, putting her mind at ease (at least for the moment).

However, despite her doubts about Bundy, she still suggested Ted Bundy as a possible suspect to the police, having recognized him from the drawing.

The trailer suggests this when Liz's friend Joanna is shown asking her how Ted’s name got on the suspect list. Kloepfer would in fact suggest Bundy as a suspect a total of three times as the scope of his crimes grew from state to state, even as she maintained her relationship with him over the years.

What could possibly explain such delusion and unwillingness to face the truth about Bundy is the common view that on appearance only, he never looked like the kind of man capable of committing such horrendous acts of violence. For all intents and purposes Ted was a seemingly normal man. He was charismatic, charming, and viewed as intelligent.

Described as almost a chameleon with a transformative essence, Bundy was a hard man to pin down both for those around him and for the investigators who pursued him. He would use those qualities to his advantage to maintain his innocence until authorities ultimately closed in.

Even as he remained incarcerated, Carole Ann Boone, whom Bundy would marry during his Florida trial, championed his innocence until his eleventh hour confession, after which she felt deeply betrayed. However, even with his confessions to at least 30 murders, there were those who still fought for him, such as Diana Weiner, a young Florida civil attorney and his last purported love interest, who attempted one last stay of execution by fighting for executive clemency.

The lengths to which some of these women went to, for a man rightly viewed as a monster, is almost unfathomable.

After his execution, there were even women who wrote and called true crime novelist Ann Rule (author of the Ted Bundy autobiography The Stranger Beside Me), saying they were deeply depressed because of Bundy’s death. Some even reported going through nervous breakdowns at his death.

While the attraction he held for women would call to mind a similar situation in the case of Charles Manson, it’s entirely dissimilar. Manson’s notoriety became emblematic of insanity and violence, given the cult formed around him, but Bundy was an entirely different beast due to the disconnect between the man and his crimes. With Manson his crimes were easy to believe—his crimes were chalked up to his appearance and insanity, but with Bundy there was disbelief for those very same reasons—he was handsome and looked sane.

It’s those reasons—that he was by all accounts a normal man on the surface—that likely make him the most notorious and fascinating serial killer of modern times. Interest in him isn’t based on his identity or the coded ciphers left behind by the Zodiac Killer, or how he came off as a weird outsider like Jeffrey Dahmer.

Instead, Bundy’s everyday man appearance spurns this interest to make sense of him and just how A led to B. This need to contextualize him and understand him is because at its core, the Ted Bundy story is one of how a normal looking man on the surface could be "extremely wicked, shockingly evil, and vile." ~Paolo Maquiraya