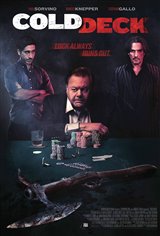 Bobby Locke (Stéfano Gallo) needs money to pay for his mother's medical care, but his dead-end job doesn't provide the funds required. His only hope is playing poker. His skills at the table are put to the test regularly at Scruples, a club run by a father-figure who is affectionately known as Chips (Paul Sorvino).

Bobby jumps at the chance when he's invited to a secret high-roller game. Along with his friend Ben, he plots to rob the wealthy players. Unfortunately, the game is presided over by Turk (Robert Knepper), who sets out to get revenge.