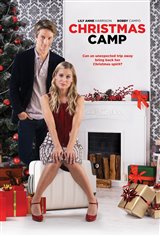 For Haley Hanson (Lily Anne Harrison), her career as an advertising executive is the most important thing in her life. In fact, she has no time for anything else, certainly not her personal life, not even during the holidays. So when she finds out that Tyler Toys, a huge prospective client, is looking for a new agency to represent them, she couldn’t be more thrilled about putting a pitch together for them.

Because Haley doesn't know a life outside of work, her boss worries that she won’t understand how to meet the needs of a traditional toy company, especially one known for their annual Christmas doll. She decides that Haley should attend Christmas Camp at Holly Peak Inn, or she won't get the account.

Haley has to learn to take a breath, bond with her fellow campers — including the owner’s handsome son Jeff (Bobby Campo) — and focus her time on the picturesque retreat aimed at restoring Christmas cheer in all who attend. While the idea of being at camp seems like just another job to her at first, Haley discovers that Christmas Camp is about so much more than what she originally thought.