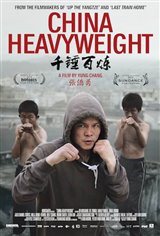 In central China, a coach recruits poor rural teenagers from local schools and farms and enrolls them in special schools to train in Western-style boxing. The goal is to turn them into Olympic champions, thus bringing extraordinary honour to their nation. The boys grow from teenagers to men as they're put through the rigours of training and fierce competition.

But the top students are forced to face dramatic choices as they graduate—should they fight for the communist ideals of a collective good or for their own fame and glory? A metaphor for the choices everyone in the New China faces now.

In Mandarin with English subtitles.