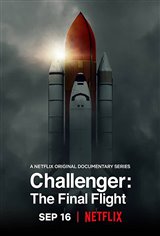 When high school teacher Christa McAuliffe was chosen from more than 11,000 applicants to be the first private citizen in space in 1986, it was exciting news. She underwent pre-flight training exercises in order to be ready to join the six astronauts — Ellison Onizuka, Gregory Jarvis, Dick Scobee, Judith Resnik, Mike Smith and Ronald McNair — on the Challenger space shuttle.

Millions were watching television as the space shuttle was launched, then 73 seconds later broke apart and blew up, instantly killing all seven on board. It was a tragedy that shocked the nation. This four-part docuseries offers an in-depth look at what happened, offering conversations with the crew’s surviving family members, training footage and rare archival material to give viewers the most unfiltered, emotional behind-the-scenes look at this event to date. Directors Steven Leckart and Daniel Junge also delve into the “fatally flawed decision process” and mechanical failures that led to the disaster, interviewing former NASA officials and engineers who worked on the failed booster engine and had repeated concerns about its safety.