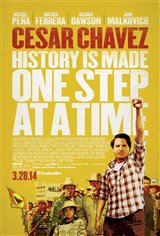 Cesar Chavez follows the life of American labor leader Cesar Chavez. Chavez (Michael Peña) organized 50,000 farm workers in California, many of whom were from Mexico and would be deported if they weren't working. These workers, often called braceros, suffered from very poor conditions. They were beaten by their superiors and were the victims of racism.

After witnessing the brutality the braceros endured, Chavez formed a labor union called the United Farm Workers, but when the owners of the farms opposed him, he had to deal with violent backlash.