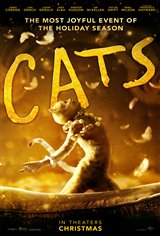 A big screen adaptation of Andrew Lloyd Webber's beloved smash musical Cats and the poems from "Old Possum's Book of Practical Cats," by T.S. Elliot in which a tribe of felines known as The Jellicles have to decide each year which one of them will ascend to the Heaviside Layer.