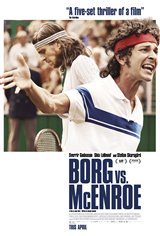 Sweden's Björn Borg (Sverrir Gudnason) has won Wimbledon four times. Just 24 years old, he's adored, wealthy, and engaged to be married. His opponent, mouthy, temperamental New Yorker John McEnroe (Shia LaBeouf), is a whirlwind of fury and precision on the court. The public loves to loathe McEnroe, who on the court can explode at any moment into tantrums of expletive-laden insults directed at umpires and spectators alike.

Both men will bring their immense talents — and inner demons — with them when they finally face off in one of the most suspenseful events in tennis history.