Black Sabbath: The End of The End 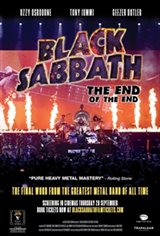 The End of The End chronicles the final tour from the band who forged the sound of metal - Black Sabbath. After nearly 50 years together, the Birmingham band took to the stage for the last time in their home city, bringing down the curtain on their final tour ever. They performed generation-spanning songs that have defined a genre in front of a sold-out arena and, in exclusive new interviews, the band themselves tell it how they lived it. After half a century, this is your chance to hear the final word from the greatest metal band of all time.