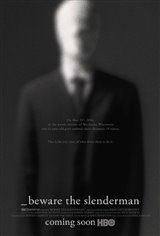 On May 31, 2014, two 12-year-old girls lured another young girl to a remote part of the woods, stabbed her 19 times, and left her for dead. Following the attack, in which the girl survived, the girls cited the "Slender Man" as a reason for their dangerous behavior. The Slender Man, depicted as a thin, unusually tall man with no facial features, originated as an internet meme that then transformed into a "creepypasta" — a horror-related internet legend. The girls claimed that the Slender Man threatened to harm their families if they did not carry out the assault.

Shot over an 18-month period of time and containing real interviews with the families of the two would-be murderers, this thrilling HBO documentary explores the attack and the shocking implications behind the myth of the Slender Man.