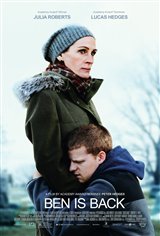 Although Ben claims he's clean now, Holly is worried that Ben is still using drugs and keeps a watchful eye on her son, to the point of hiding her prescription drugs and asking Ben to leave the bathroom door open. Over a turbulent 24 hours, new truths are revealed, and a mother’s undying love for her son is tested as she does everything in her power to keep him safe.