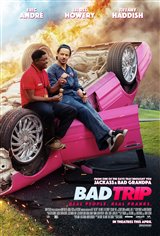 This film features Eric André and Lil Rel Howery as a couple of friends who get into precarious situations, which are filmed in front of real people (non-actors), who don't realize what they're witnessing is staged.

Eric André meets Maria (Michaela Conlin), who is visiting Florida from NYC, and she tells him that if he's ever in Manhattan, they should get together. Eric tells Lil Rel he feels it was a positive omen. He decides they should take a road trip to NYC in Lil Rel's sister's car, because she's in jail and will never know. Next thing you know, his sister (Tiffany Haddish) escapes from prison. Enraged when she finds out her car is gone, she steals a police car, shocking bystanders.

Along the way, Eric pulls off a number of stunts, such as getting his hand stuck in a blender and taking a selfie with a gorilla at a zoo, while real people watch in shock.