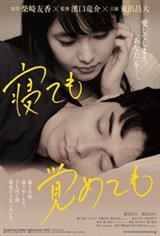 Asako (Erika Karata), a shy student living in Osaka, meets Baku (Masahiro Higashide), a gorgeous-looking young man, at a photo exhibition. It’s love at first sight, but Asako soon finds that Baku is prone to just disappearing when he feels like it. Finally, when he doesn't return, it seems he’s gone for good.

Two years later, Asako is now living in Tokyo. She spots Baku, but it's not him, it's his exact double — looks-wise. Ryohei (Masahiro Higashide) is actually completely different when it comes to personality. He's good-natured and dependable, unlike Baku. She's immediately attracted to him because of his looks, but she's unsure at times how she feels about him, because he's so different from Baku. Nonetheless, they form a couple and eventually begin living together.

However, when Baku resurfaces, she questions her feelings for Ryohei.

An adaptation of the best-selling novel of the same name by Japanese author Tomoka Shibasaki.