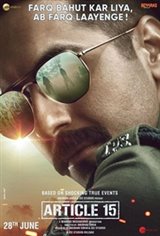 Article 15 is set in a tehsil called Lalgoan, somewhere in Uttar Pradesh (India). This is a story of an IPS officer, Ayan Ranjan and his fight against 'India's caste system'. Raised all over Europe, Ayan's understanding of India is mostly bookish and exotic. Little did he know that a small tehsil would turn his life upside down.

First day in office, Ayan witnesses a horrific crime against three Dalit minor girls from a lower caste village Harimanpur.From this moment on, he gets entangled between how the traditional system would deal with it, and his basic human instincts that threaten to draw him deep inside.

While struggling to maintain his relationship with his wife Aditi, a conflicted Ayan can see the law and justice drift away easily, knowing perfectly well that any effort from his side to obstruct this perfectly oiled machine and its psychology will be catastrophic.With one of the three girls still being missing, and the opportunity to let this case go through inertly, Ayan would need to choose between a path, where he can either come of age or take an easy escape route which most of us prefer.The film's title is a reference to an article of the Indian constitution that prohibits discrimination on the basis of caste, religion, race or sex.