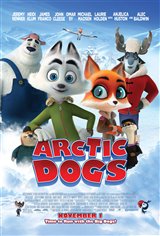 Swifty the Arctic Fox (Jeremy Renner) works in the mailroom of the Arctic Blast Delivery Service, but dreams of one day becoming a Top Dog (the Arctic's star husky courier). To prove himself worthy of the Top Dog role, Swifty secretly commandeers one of the sleds and delivers a mysterious package to a secret location. He stumbles upon a hidden fortress, where he comes face to face with Otto Von Walrus (John Cleese), a blubbery evil genius, who walks around on mechanical legs and commands a loyal army of oddly polite puffin henchmen.