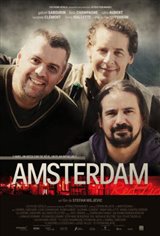 After telling their wives they’re departing on their annual fishing weekend, three childhood friends fly to Amsterdam with plans to drink plenty of alcohol, take drugs and spend time with prostitutes in the Red Light district. When the time comes to return home to Quebec, Sam decides he wants to stay there and rethink his future with Madeleine, who recently announced she was pregnant.

To cover up for their friend, Jeff and Marc say he disappeared into the woods after a heated argument during the fishing trip. Marc’s wife Beatrice calls the police, who organize a search party. Simone, Sam's psychologically fragile sister and the wife of Jeff, frantically puts all of her energy into the search for her missing brother, with unfortunate consequences.