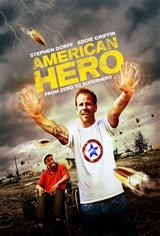 Melvin (Stephen Dorff) has telekinetic abilities but rather than embracing them, he's spent years using them as party tricks, devoting his energy instead to pursuing booze, drugs and women. A slacker who lives with his mother and sister, Melvin has failed at nearly everything in life.

When he survives a brush with death, Melvin vows to set his life straight, including being a father to his young son, whose mother, his ex-wife, has not let him see much of due to his hard partying ways.

Enlisting the help of his best friend, a disabled war veteran named Lucille (Eddie Griffin) as his sidekick, he attempts to fight crime and clean up the streets of New Orleans using his abilities.