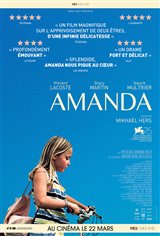 Sandrine, a teacher and single mother, is raising her seven-year-old daughter Amanda alone. Sandrine’s brother David helps out, sometimes picking Amanda up from school and babysitting. One day, the young man is confronted with the unthinkable: the brutal murder of his sister during a terrorist attack at the Bois de Vincennes. Appointed Amanda’s guardian, David now faces the challenge of raising her. Amanda, in turn, must learn to cope with the loss of her mother, as she struggles to adapt to this new reality.