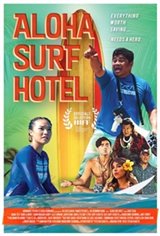 When his scholarship at the local college is cut off, ex pro surfer Tai "Gonzo" Alonzo is forced to get his first real job. He's hired as the surf instructor at Ha'i Nalu Cottages, a struggling beachfront hotel that's been owned by the Kahele family since the times of the Hawaiian monarchy.

Soon Tai is the tennis pro, the substitute yoga instructor, the handyman, the fire-knife dancer - he might even be key to saving the hotel from a corrupt county inspector and an unscrupulous developer.

As he and his misfit colleagues struggle to save the hotel together, Tai also works to support his teenager daughter, patch it up with his ex, and scrape together enough cash to get his beloved van out of impound.