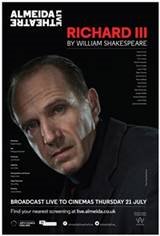 The Almeida Theatre makes its live screen debut with the William Shakespeare classic Richard III. Through the unique direction of Olivier-winning director Rupert Goold, Shakespeare's iconic play takes a modern twist; examining the psychology of greed, and exploring the machinations of an evil monarch who changed the face of British history.

Ralph Fiennes plays notorious villain Richard, a man consumed by his need for power. As England suffers through wartime, King Edward attempts to hold his country together wholly unaware that his brother is armed and ready to seize his crown.