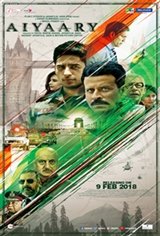 Two Indian Army officers. A mentor. And his protégé. Two officers with a patriotic heart suddenly have a fallout. The mentor, Colonel Abhay Singh, intelligence par excellence has complete faith in the system of the country. While protégé Major Jai Bakshi thinks otherwise because of what he has seen and heard in his recent stint in surveillance.

Jai Bakshi decides to turn rogue and this is what kicks off the story. Abhay has 36 hours to rein in Jai while Jai sits on a secret that can bring down the Government.