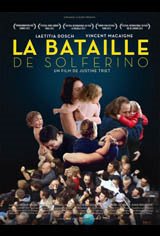 Paris, May 6, 2012. Given the task of covering the second round of presidential elections, TV reporter Laetitia asks a student named Marc to babysit her two young daughters while she’s out. As she’s about to leave, she spots her ex-husband — deadbeat dad Vincent, who has come to exercise his parental rights. However, since he missed an appointment set the day before by the Court, which required the presence of both parents, Laetitia refuses outright to let him visit and warns Marc not to let him in.

On the street, surrounded by hundreds of overexcited François Hollande supporters, Laetitia strives to keep a cool head during her live interviews. When she finds out though a message on her cell phone that Vincent has finagled his way into her apartment, Laetitia orders Marc to join her with the children on Solferino street, but that’s just when things get worse.