Agatha and the Truth of Murder (Netflix) 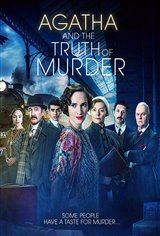 It's 1926 and Agatha Christie (Ruth Bradley) is going through a rough time. Her husband Archie (Liam McMahon) is having an affair and wants to leave her for another woman. The heartbreak Agatha feels leads her to experience writer's block. She just can't come up with an interesting plot for a new book.

When a nurse named Mabel (Pippa Haywood) comes to her home looking for help in solving a murder, Agatha turns her away at first. But the woman leaves behind a folder of news clippings, and Agatha soon grows curious. She goes to Mabel's home to learn more about this murder. It turns out that Mabel's longtime friend and fellow nurse Florence (Stacha Hicks) was bludgeoned to death on a train six years earlier. The perpetrator has never been found.

Agatha decides to take a leave of absence from her life and together with Mabel, sets up a scenario in an old country manor. They invite all the suspects they've come up with, and tell them they have been named in a will. As they study each person, Agatha and Mabel have to come up with which one had a reason to kill Florence. There's just one catch: Agatha's photo is in all the newspapers, listed as a missing person. The police are conducting a search and all the people of England are hoping for the best.