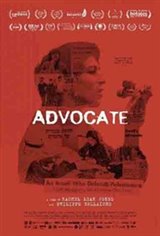 Since the early 1970s, Jewish-Israeli attorney Lea Tsemel has made a career out of defending Palestinians in Israeli courts: from feminists to fundamentalists, from non-violent demonstrators to armed militants, including suicide bombers.

In ADVOCATE, filmmakers Philippe Bellaiche and Rachel Leah Jones deconstruct this controversial figure who will defend anyone who opposes what she describes as an illegal occupation of Palestine.

Tsemel is by her own words "non-discriminating" about who she represents: her goal is fair representation within a court system that she believes is rigged against Palestinian prisoners, and she reserves judgment even of those guilty of terrible crimes.

But her perspective goes beyond criminal justice as the film outlines, Tsemel has been committed to left-wing advocacy all her life.

Tsemel insists that Israeli law is fundamentally flawed when it comes to Palestinian criminals, on the basis that an occupier has no right to tell the occupied how they should resist. ADVOCATE follows Tsemel as she takes on two new cases, and illustrates her decades-long clash with the Israeli establishment.