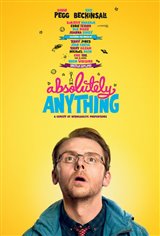 A group of aliens bestow the ability to make absolutely anything happen on Neil Clarke (Simon Pegg), a random Earthling, to see if he uses the power for good. If he uses it for evil, the Earth will be destroyed.

When Neil discovers his ability, he uses it for things like getting dressed with the wave of a hand and giving his dog Dennis (voiced by Robin Williams) the power of speech. He fumbles with the power, at first using it selfishly, then without enough thought, such as wishing everyone who ever died would come back to life, which he quickly realizes is a mistake.

When he decides to be the President of the United States, he really has the chance to use his power for good. But will he? Or will he blow his chance to save mankind?