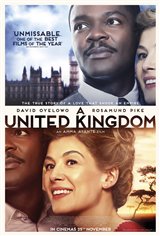 In June 1947, Prince Seretse Khama of the Bechuanaland Protectorate (now known as Botswana) met Ruth Williams, a 23-year-old English woman at a Missionary Society dance in London. Despite his being an African of noble birth, and she a white woman of no distinguishable means, the two would go on to fall in love and marry. Their unconventional relationship sparked controversy among their own families, as well as a national outrage among both South Africa's apartheid government and the tribal elders of the Bamangwato.

Seretse Khama was born on July 1, 1921, in Serowe, to one of the most powerful royal families in Bechuanaland. He was the son of Queen Tebogo and Sekgoma Khama II, the paramount chief of the Bamangwato people, and the grandson of Khama III, their king.

Born on December 9, 1923 in Eltham in South London, Ruth Williams was the daughter of Dorothy, a homemaker, and a British Army captain father, George. She was educated at Eltham Grammar School in London.

At the time of their meeting, Seretse, then 25, had just graduated from Balliol College, Oxford, and was training in Inner Temple to become a lawyer. Ruth, after serving as a Women's Auxiliary Air Force ambulance driver during World War II, was working as a clerk for Cuthbert Heath, a firm of underwriters at Lloyd's of London. While attending a dance at Nutford House in London, Ruth's sister, Muriel, introduced her to the then-Prince Seretse. While there was no initial attraction between the two, they eventually bonded over their mutual love of jazz music. After a year of dating, Seretse proposed to Ruth, and she said yes.

The engagement was tumultuous. Ruth's father disowning her for marrying a black man, and her employer fired her. Seretse tried to get the local missionary society to intervene on her behalf, but to no avail. They also soon discovered they couldn't be married by the Church without the express written permission of the British government. Despite these setbacks, the couple went ahead with a civil ceremony at the Kensington Registry Office in London.

Returning to Bechuanaland proved much more difficult, with Seretse's uncle Tschekedi Khama reportedly threatening, "If he brings his white wife here, I will fight him to the death," and calling for an immediate annulment of the marriage. However, Tschekedi underestimated his nephew's resolve to be with the woman he loved. After a series of kgotlas (public tribal meetings), Seretse did not budge on his position to stay married to Ruth. Impressed by his conviction, the elders re-affirmed his role as kgosi — leader of the tribe. Defeated, Tschekedi Khama left Bechuanaland, while Seretse returned to London with Ruth to complete his studies.

Unfortunately for the newlyweds, the problems did not end there. Bechaunaland's neighbor to the south, South Africa, was still under the terror of apartheid, and its people were horrified to discover that the leader of an African nation was married to a white woman. The South African government — then a British protectorate — put incredible pressure on the British government to do something about it. The government subsequently initiated a formal inquiry into Seretse's qualification for chieftanship and ultimately found him fit to rule. Their official statement read, "We have no hesitation in finding that, but for his unfortunate marriage, his prospects as Chief are as bright as those of any native in Africa with whom we have come into contact."

However, in secret, the government ordered the report suppressed, and during a meeting with the Labour government to talk about the future of the Bamangwato tribe, Seretse found out he had been exiled from his own country. Fear of an impending war between South Africa and Bechuanaland, and Britain's heavy WWII debt pushed the Labour government toward its controversial decision.

Once the British people, including the opposition party, found out about what had been done, they were appalled, holding it up as evidence of British racism. Tory leader Winston Churchill called it "a very disreputable transaction." They also called for the resignation of Lord Salisbury, the minister responsible for Seretse's exile. In 1956, the Bamangwato people were ordered to replace Seretse. They refused. Eventually, Seretse and Ruth were allowed to return that same year, but only as private citizens, and not as leader and wife.

Over the next few years, Seretse attempted a career as a cattle rancher, and again tried his hand at politics, being elected to the tribal council in 1957. But it was from the ashes of his former tribal leadership that he built the nationalist Bechuanaland Democratic Party in 1961. His exile offered him credibility among the independence-minded electorate, and the BDP swept the 1965 elections, with Seretse sworn in as Bachuanaland's new prime minister. Throughout his first year in office, Prime Minister Khana pushed for the country's independence, first establishing a new capital city, Gaborone. His determination ultimately proved successful, and in September 1966, Bechuanaland became independent. The newly sovereign nation was renamed Botswana, with Seretse as its first-ever President. That same year, Seretse was also named Knight Commander of the Most Excellent Order of the British Empire by Queen Elizabeth II.

When Seretse took over as president, Botswana was the third poorest country in Africa. Within his first months in office he began a vigorous economic program that included transforming the country into an export-based economy built around beef, copper, and diamond mining. He also set about minimizing corruption and adopting market-friendly policies to foster economic development. These measures, in conjunction with his promise of low and stable taxes, liberalized trade, and increased personal freedoms, led Botswana to have the fastest growing economy in the world between 1966 and 1980.

By the mid-1970s, Botswana was left with a budget surplus. Seretse and his government used these revenues to invest heavily in the expansion of infrastructure, the education system, and health care. Along with the heavily subsidized cattle industry, and a lucrative trade deal with the European Economic Community, Seretse established the Botswana Development Corporation to attract foreign investment in agriculture, tourism, and other industries. In 1976, Botswana's independence was further cemented when it adopted its own national currency, the pula, replacing the South African rand.

Seretse's influence would not stop in Botswana. The politician also helped to negotiate the end of the civil war in Rhodesia, which resulted in Zimbabwe's founding and subsequent independence. He also co-founded the Southern African Development Co-ordination Conference months before his death.

Following years of health problems, including heart and kidney ailments and diabetes, Seretse was diagnosed with terminal pancreatic cancer in June 1980, and died of the disease on July 13, 1980. He was 59 years old. Forty thousand people showed up to Gaborone to pay their respects to the late president, whose legacy became one of great courage. He was and still is remembered as a man who refused to cater to the whims of a segregated society, subsequently changing the face of an entire nation.

Seretse's equally brave wife, Ruth Williams Khama, died of throat cancer in Gaborone in 2002, at the age of 78. She was buried in Botswana next to her husband at the Royal Cemetery in Serowe.

Seretse and Ruth are survived by their four children, two of whom went on to become prominent politicians in Botswana. Their eldest son, Ian Khama, became president of Botswana in 2008. ~Shelby Morton