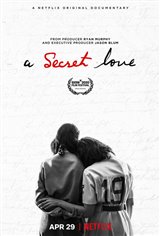 This documentary takes a look at same-sex couple Terry Donahue and Pat Henschel, who have been together 65 years at the time of filming. They met in 1947, when Donahue was a professional baseball player in the All-American Girls Professional Baseball League (the real-life inspiration for the 1992 film A League of Their Own.) As they age, they decide to leave the house where they'd lived for years and enter the nearby Delnor Glen Assisted Living facility, where they were married in 2015, on Donahue's 90th birthday.

However, although they'd lived in Chicago since the 1950s, as Donahue’s rapidly progressing Parkinson’s disease became a concern, Donahue's family encouraged them to come live in Canada, where they could provide more care for them.