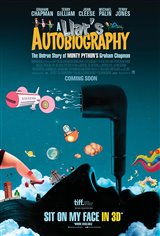 Monty Python writer Graham Chapman, despite being dead for over 20 years, stars in this animated movie of his life, thanks to 45 minutes of newly-discovered audio recordings. Based on his book A Liar’s Autobiography, the film tells the story of when Chapman went to Cambridge, met John Cleese, became a doctor, became a Python, decided he was gay and moved to Los Angeles—all the while smoking, drinking and having a lot of sex.