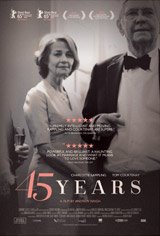 Geoff (Tom Courtenay) and his wife Kate Mercer (Charlotte Rampling) are preparing to celebrate their 45th anniversary at their country property in Norfolk, England. Everything is going pleasantly until Geoff receives an unexpected letter in the mail. The body of Katia, an old girlfriend who fell during a hiking trip with Geoff, has been discovered in the Swiss Alps after almost fifty years.

The news causes hidden tensions to surface between Geoff and Kate. Geoff is consumed by the past and Kate by jealousy and uncertainty. As she battles to remain outwardly composed, Kate begins to wonder if she made a mistake all those years ago.