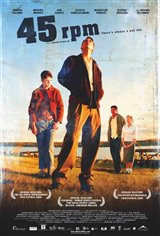 It's the Autumn of 1960. Fifteen-year-old Parry Tender doesn't know where to turn. Hassled by the local cop, Parry wants out of his small town hell. He's lived in Goose Lake all his live. It isn't much; about 200 folks in all give or take. It's five hundred miles north of nowhere which to the satisfaction of the United States Air Force makes it only five hundred miles south of the "DEWLINE," a continent wide chain of early warning radar stations constructed across Canada's Arctic during the paranoia of the Cold War. With its 4,000-foot gravel runway, Saskatchewan's Goose Lake is the perfect spot to airlift men and materials into Canada's frozen north. It's all very secret—all very boring—and no one wants out more than Parry.

Parry isn't asking for much. He only wants a little more that he already has which is an old Cree grandfather named Peter George who isn't even kin, and his best and only friend Luke, a 13-year-old girl who looks and acts more like a boy.

Parry knows the dangers of small town life. Suicide cured his mother's troubles, and his father? Well, that's another story. When a fluke atmospheric condition allows a 50,000 watt Manhattan radio station to pump its infectious rock'n'roll signal into Canada's far north and out through the small paper speaker of Parry's RCA radio, Luke can't believe their luck. WABC - New York, 770 on the AM dial is running a radio contest. The winner and a guest will be flown to New York City to attend Alan Freed's Fourth of July rock'n'roll party at the Brooklyn Paramount. It all seems simple enough. Parry and Luke will win their escape from Goose Lake. But when Debbie Baxter, the pretty daughter of an American Army Air Force Major steals Parry's heart, no one is certain what will happen next.

Canadian Connection: Filmed in Saskatchewan. Most of the actors are Canadian.