45 Days: The Fight for a Nation 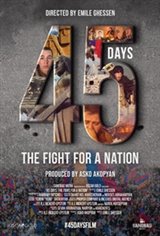 The war lasted 44 days and on the 45th day, a trilateral peace agreement was signed, ending hostilities between Armenia and Azerbaijan.

With thousands of men killed and thousands of people being displaced from their homes, Armenia lost majority of the territory of Nagorno-Karabakh. The raw unseen footage of "45 Days: The Fight For A Nation" tells the story of the war and post war from an Armenian perspective in a humanisation feature documentary film.