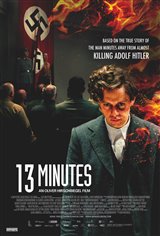 During WWII, in November 1939, Georg Elser (Christian Friedel) plotted to assassinate Adolf Hitler by leaving a bomb at a place and time where the dictator was scheduled to speak, hoping that it would not only kill Hitler, but other high-ranking Nazi leaders. When Hitler left 13 minutes earlier than expected, Elser's plot failed.

Arrested by the Gestapo later that night, Elser is tortured, but insists he came up with the plot on his own. While in confinement, he thinks back on his reasons for wanting to kill the dictator and what the events were that led him to come up with the plot.