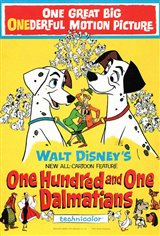 Roger Radcliffe is a single guy living in London, England with his mischievous dalmatian Pongo, who takes it into his own paws to find a wife for Roger. While at the park, they run into Anita and her female dalmatian Perdita. As fate would have it, the two fall into a pond together and end up falling in love - the two dalmatians hit it off as well.

When Perdita gives birth to 15 puppies, the evil Cruella De Vil steps in and offers to buy the pups for a hefty amount. However, Roger assures her the puppies aren't for sale. So, Cruella decides to hire two thieves to steal them so she can continue her plans to create fur coats with the skin of the puppies.

Pongo and Perdita, along with the help of some other animal friends, must rush to find the pups and bring them home before Cruella gets her hands on them.